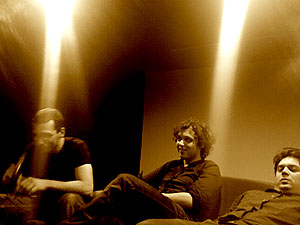 The Spanish band Tom Cary is a good example of self-management, determination and talent these days. They formed in Málaga at the end of 2005 by Pablo Garrido, Fran Verdugo and Javier Muñoz. Just with their first demo out they won the most prestigious music contests in Spain, such as “Proyecto Demo 2006” – run by RN3 (Spanish National Radio) together with MTV channel and Benicàssim Music Festival (FIB).

At the beginning of 2007 Steve Albini became interested in the band and he accepted to carry out the production of their first album in Albini’s “Electrical Studio” in Chicago. This is how they shaped “That’s right! Clean your soul” (anewlabel / Pias Spain). Recorded live during the last week of July 2007, their songs are a good sample of the sound of the band in its pure state.

Both Tom Cary and Naïfloop (Pablo Garrido’s solo project) belong to the music collective, videocreation and netlabel MIGA (www.miga-label.org), thanks to whom they developed a curious approchement into electronics . It is blues-punk-garage music blended with digital noise. Somebody said they looked like the Stooges through Ryoji Ikeda’s laptop.

They’ve been touring during the whole year around Spain and Europe (Fib 2006, European bienal in Italy) and nowadays they are doing a small tour nationwide with the Sevillian band Pony Bravo thanks to the prize “Circuito Pop-rock” sponsored by the region of Andalusia. They’ve also been invited to take part in the prestigious festival “South by Southwest” in Austin (Texas) next year, as well as in the Festival FFF in South America and which is held in the city of Ambato (Ecuador).

Their work has been remarked by Spanish musical media such as “Rock de lux”, “Mondosonoro” or “RN3” (Spanish musical radio station) and they have played in same festivals as renowned artists such as Tom Verlaine, Echo and the Bunnymen, The Pixies or Ryoji Ikeda. At the beginning of 2009 they will release their second album as they try to find managing and distribution for the British Isles and the rest of the world.