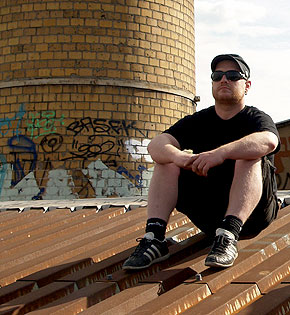 Steffen Schršder, born 1973 in East-Germany, begins with his first tapes at the age of 14. Influenced by the music of Depeche Mode, Tangerine Dream, EBM, Acid House and Industrial, he recorded for the next three years mixes from Industrial Dance to Acid House.

In 1990 - Techno was just growing in popularity in Europe - he constructed his first Techno tracks with an Atari and the Fasttracker program. At the same time he started his DJ-career and began to organise own parties. Under his alias Shrotty he worked as a DJ till 1998 at many different places - from Berlin to Vienna. In Berlin, where he lives since 1996 by now, he performed in well-known clubs like the Suicide, Casino, Bunker etc.

Around 1999 his music style developed more and more from Techno to IDM and Electronica. From then on he produced multipled IDM -and Electronica tracks under his new alias Huron. In the following years he published two discs at Trachanik Rec. and did some remixe i.a. for Atmogat.

2005 he and a friend founded the net-label Crazy Language. Here he published further own productions like "Social engine", "Color days" or his last disc "Soul @ hope". Besides that he and his friend could won around some big names of the IDM/Electronica scene (e.g.Orbique, Envitre, Rec Overflow, Ralp, Landau, Kero, Integral etc.) to publish tracks on their label.

By today he playes on parties asides from Shrotty also as NGS and Huron. At last, a co-production with DNN has been achieved. These two did some tracks for an album on Halbsicht Records which will be published very soon.