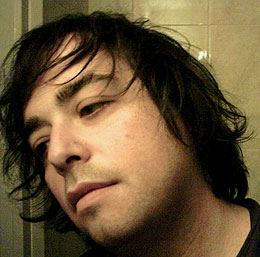 Fernando Lagreca was born at Montevideo, Uruguay, even nowadays residing in Barcelona, since end of 2002. Member of Innova, a collective of digital artists, Fernando Lagreca has a penchant for the latest electronic music tendencies such as clicks & cuts, microhouse, techno,etc.

His prolific career includes a good number of record references on both CD and 12” format, spread about in labels such as Autoplate, Original dance Music and Climax Recordings, and live perfomances shared out with Mouse On Mars, Jorge Haro and Gustavo Lamas, among others. Running parallel to his record production, Lagreca also produces sound ambience for exhibitions and music for video-commercials. Far form neglecting on melodies – a basic ingredient of his dance music career-Lagreca is particularly interested in ambient music which he mixes up with glitchs and oscilations.

He had been booked for the english label Climax Recording for to launch a 12”, as well as by the Madrid’s label Original Dance for releases and remixes. Also, he has released two albums in the electronic / folk german label Autoplate, one ep in Sumo de house”s french label, another album with Realaudio.ch netlabel (switzerland), and he is currently promote his tracks through your own label in Barcelona, called Greknoise Recordings.

Their styles round Minimal and Tech-house, for dance clubs, in wich the musician develops live acts based in a laptop + sampler deck, and the other face, ambient pop melódico and electronic in-noise frequencies, combining radio cuts, static, loops and another kind of generated noise with sounds of our daily environment, showing the most experimental side of the artist.

Currently, he has just finished his new album, “Colpi di sole”, with subtle-popvocoder melodies and harmfull guitars. This album will be launched by Autoplate net.label (Germany) on about end october.