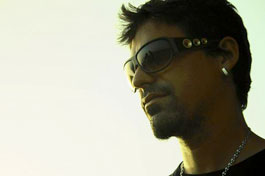 Anton Martin is Antonio Martín Rodríguez-Hesles and is also known as Antonmártin or Malagueta and was born in 1981.

He is doing rap since 16 years old, releasing his first track for the compilation "Málaga en Parámetros", thanks to Rayka who has been one of his main supporters on his musical career, together with Bighozone.

He is part of a band, together with Fred Medina and Dj ubba, called Picos Pardos Fam, acting in many places throughout Spain.

Two tracks released, one untitled in 2004 and "Vienen Curvas" in 2006, they have been well recognized from both audience and professional field, being even contracted by the label Angelface records, which ended sooner than expected.

With a two year delay, they are preparing the release of their LP "Game Over" on their own.

After this release will come a mixtape from dj Bubba with his participation, and his first demo by himself, produced by his friend Bighozone, apart from collaborations and unfinished projects with his "fam".