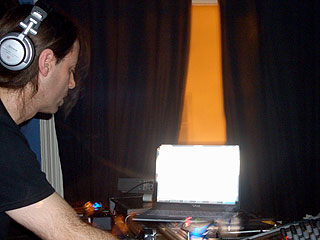 Andrea Kalenda aka Octad was born in Rome (Italy). He started as DJ in 1986 playing at numerous private parties and also in many clubs in Italy. From 1986 to 1992 he's been playing different styles such as dance, hip hop, new beat, acid house and house music and so on. After that in 1993 he completely changed his sound to straight up deep hard techno and minimal techno tracks.

In the end of 1995, in his own studio Octad produced the first tracks for his new label Voyager Records jointly with Remix Records Shop in Rome and Neuton Distribution resulting, January 1996, in his first release: "Brain Emission e.p."

During all these years he was working in various productions with several international artists, such as Marco Bailey and the portuguese DJs: DJ Ze Miguel; DJ A. Paul; DJ Jiggy, as well as italians DJ/producers: Freddy K, Sabino Rossignoli, Max-M, Dash-T or Pierantonio Gualtieri.

In May 2005 he moved in UK, and together the label mates Phiorio and DJ Raw, he found a Net Label Project  Metroline Recordings, where one year later it become also a new physical label called Metroline Limited establish with the purpose to promote new coming artists and collaborate with top DJs/producers.