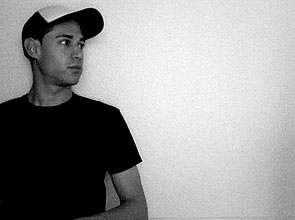 At the early age of 14 he is already in front of his computer with the aim of producing his own tracks and two years after Divucsa Music label includes two of his breakbeat tracks in a national compilation which include artists like The Freestylers, Aquasky vs Masterblaster and Krafty Kuts. Then he discovers Turntablism and gets involved in the hip hop style both in production and DJing.

At 17 he moves to Granada and start to feel interest on minimal Detroit techno, becoming resident of the venue Piramide Electronic Hall and closing its Goodmorning sessions between 2006 and 2007. Then he joins the Natural Element colective, playing at Industrial Copera, sharing line up with artists like Gaetano Parisio.

In 2008, with 19 years old he releases his first EP (Sidra EP) with the label Boayer, leaded by Dj Memo, being the best seller of this label on Beatport. His taste for italian sound take him to collaborate with Minicool Records, from Minicoolboyz, where he is now preparing Simo EP, which will be released in 2009.

During summer 2008, he has been playing in Ibiza with Natural Element colective. At the same time, his first solo work as hip hop producer will be released: "Beats 4 No Talkin´ About...", where he remixes hip hop classics with an electronic touch.