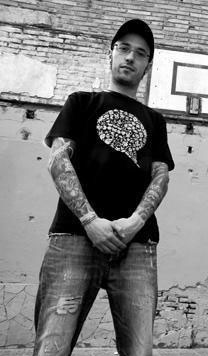 Javier Orduña, born in 1978, begun playing in his home town, Zaragoza, at clubs like the Apotheke, Jockers, Kitsch and the Doom, where he was a resident during the club’s final phase, before moving to Barcelona. He also played at Minimal parties, most important techno parties, in which have worked international artists such as David Carreta, Ben Sims, Oscar Mulero, etc…

In 2001, when he moves to Barcelona, he starts playing at the mythical Moog Club, on a Sunday monthly residence, during the special sessions called Clear, in which every Sunday people like Angel Molina, Zero, Dr. Smooke, etc… used to play. In January, 2002, he launches his Rebeltech DJ’s Project with his friend, Anthony Manejas (DJ Bruce Lee). At that time, they begin playing at clubs in Catalonia as significant as Le Rachdingue, Palm Beach, Peach, La Cova, Cyberian, L’Eix, Spunny, Zoreks, Blau, Be-Cool, La Terrrazza and at various clubs in the rest of the state, like Family (Toledo), Pagoa (Oiartzun), Blau (Girona), Overdose (Zgz), and internationals clubs like Flex Club (Viena-Austria)etc…

Their first anniversary, celebrated at Le Rachingue, is one of their most famous parties. They invite Mark Broom (Pure Plastic- U.K.), one of their favourite producer and dj. Early on 2003, Javier Orduña made a month and a half tour around Chile, playing at different clubs in the country, and sharing his workplace with Alexi Delano, one of the most famous European House producers. They created a new electro project with renown Chilean producers such as Francisso Allendes. During the last two years they have participated in festivals like “Steparea” in Aragon (working with James Ruskin and Mark Broom), Lerida’s H2Zone, or the one promoted by Global Music called “La Chimenea Festival”, with Green Velvet and Kazu Kimura. They have played at parties as well with artists like Carl Cox or in their own anniversary parties, like this last one in wich they played with Angel Molina at the Blau Club and at the Cyclick.

His last shows and his long career, are a credit for him to be a great dj, and allow him to play sessions at places such important as Florida 135. At the same time he creates 2nd Room Records called new label, and produces themes with Iñigo Oruezabal, but at last he associates Hector Herrera to create Retronoveau. Soon they’ll get the next references for 2nd Room Rec. (Green Series) with Iñigo Oruezabal (Zgz) and Jose Lüker (Bcn). Up to now, he has worked together with the last one of them and he has launched 4 references distributed worldwide by Decoder Muzique. Many famous people have participated, like Mark Broom, Takaaki Itho and Green Velvet. At the present he works for a new nationals labels named Soundfate and Rubrik Records producing more harsh and direct to the dance floor Techno themes.