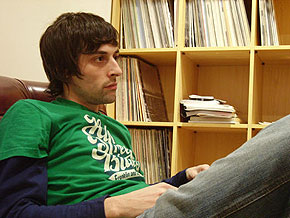 Pep Gaya's musical career begins in his early teen years, when at the age of 14 he finds about some British indie pop and some other American alternative rock bands. Years later he started composing his own music. Despite his predilection for fragile melodies, his great interest in the rhythmic base of songs took him to study drums for four years. His musical background would be complemented with music theory, piano, and later on a sound technician course.

In 1995 he met Daniel Seix, Eduard Gilabert and Michel Guerra, with whom he would form a band interested in exploring the grunge terrain. Some years later, after changes in the formation where Pep played drums, they became evolving to a very personal and innovative noise pop. The band dissappeared about the endings of the 20th century.

His first contacts with electronic music began in 1996, at first with all those styles within the chill-out label, as downtempo, trip hop, drum'n'bass... then breakbeat, techno-house and slowly from year 2000 he entered the minimal domain, just as he discovers sequencers and such electronic devices, point from which he hasn't stopped exploring the landscapes of the most mental electronic, fragile and suggestive music.

From the endings of year 2001 to beginnings of 2006, together with Robert Lamart, Pep Gaya was involved in the direction of the Bakomba club, where he programmed quality electronic music dance sessions.