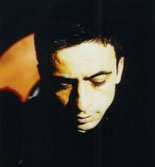 Miguel Marín was born in Sevilla in 1974. From 1992 to 1996 participate in several indie pop bands, being one of the most interesting musicians of the moment, mixing abstract rythms with minimal drums, bein "Compito" one of the most relevant, being the second Lp from the band Sr. Chinarro.

Guided by his interest on the knowledge of music, he travels to London where he gets fascinated by the mixture of cultures and the idea of communicate in other language. On 1998 he arrives to the band Piano Magic, one of the most interesting british bands of the last years. From then he starts producing melancolic and minimalistic tracks, and then is when the famous "Artist´s Rifles" from Piano Magic comes out. Lates he worked for the famous spanish film director Bigas Luna, on the soundtrack of the film "Son de Mar". This was a real breakdown on his career, making him more inspired to make the deepest and coolest sounds.

On january 2002 he goes out from Piano Magic and release his first own production, under the name of Arbol, being remarked by the best european magazines, specially in the Uk. On other side, he collaborate on multimedia sets together with Chu Uroz or Leo Obstaum, being these works exposed in places like Macba in Barcelona or ICA in London. In 2003 is part of the Sonar Festival, with soundtracks combined with acoustic elements. Later he worked again with Bigas Luna in "Las comedias barbaras", combining multimedia, theater, and performances with more than 90 people on stage.

On 2004 does the soundtrack for the short film "41 grados", directed by Santiago Garrido, is part also the project "Beyondidentity" with Leo Obstbaum and with the special collaboration of David Victori, being part again of Sonar Festival in the Sonarmatica space. In 2005 his new work comes out as Arbol, called "Dreams made of paper" under the independent label Lejosdiscos, and his own label called Emilii Records.

Today he is working teaching Pro Tools for electronic soundtracks on the civic centre of Barcelona "Les Basses". Arbol and Onionlab presented "Imaginary Soundtracks" again in Sonar Festival 2006 at Sonarama. He is planning to launch his third album as Arbol on the beginning of 2007.